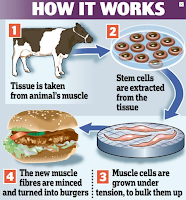 The biggest talking point in food this week has undoubtedly been the first man made burger branded by many as the ‘Google’ burger.
If you’re late in getting in on the story, I am of course talking about the world’s very first burger made solely from stem cells in a laboratory.
But the story which has split the views of many professionals of how the burger got to the plate is a somewhat intriguing one.
It all began around three months ago with cows raised on an organic farm.
Stem cells were extracted from a biopsy of two cows and these cells were used to grow 20,000 muscle fibres in individual culture wells.
Following a few weeks of growth each hoop of fibre was removed by hand, cut open and straightened out.
The fibres were then pressed together, coloured with beetroot juice and mixed with saffron, breadcrumbs and other biding ingredients to form the burger, the same biologically to beef except grown in a lab.
The project, funded by Google co-founder Sergey Brin topped a staggering £215,000.
So what was the motivation for the experiment and how did it go down in the taste test?
Sergey said he got involved due to animal welfare reasons and his disgust with modern farming methods.
But aside from personal agendas a key driving factor has been the efficiency of animals.
Due to the rising human appetite for meat, 30% of the Earth’s usable surface is covered by pasture land for animals, compared with just 4% used directly to feed humans.
The problem with this is that livestock accounts for 5% of carbon dioxide  and 40% of methane emissions.
If the human population rises to its predicted levels by 2060 and the demand for meat doubles livestock will equate for half as much climate impact as all the world’s cars, lorries and aircraft.
The burger was cooked in London and tasted by US author Josh Schonwald and Austrian food scientist Hanni Rutzler.

Initial thoughts were the taste was there but it lacked the juiciness of a conventional burger, but would be improved with the introduction of fat, which is the next stage to the experiment.

What are your thoughts on the ‘Google’ burger? Can you see a time when man made burgers will have a place on supermarket shelves?

Let us know what you think by commenting below, posting on our Facebook page or send us a tweet!