“Should old acquaintance be forgot, and never though upon;… That thou canst never once reflect on old long syne.” – Robert Burns 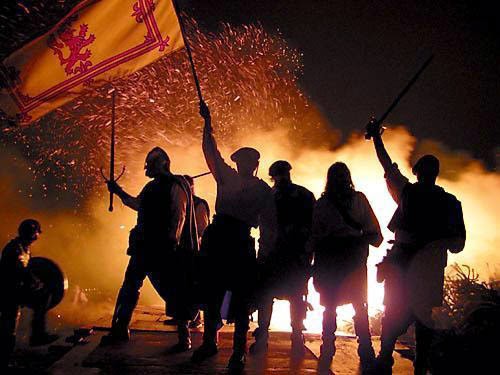 A season full of celebration and yuletide cheer! Although it is argued that no one can do the festive season quite like the Scots. As a result of this theory, which as a traditional Scottish food manufacturing company we fully support, we have put together some top tips in how to have a most traditional Scottish Christmas & New Year:
Christmas Eve
Christmas was traditionally banned in Scotland for nearly 400 years. It wasn’t until the 1950’s that Christmas was actually declared a national holiday! Since then Christmas has exploded in popularity, with people traditionally burning the branches of a rowan tree on Christmas Eve (24th December) to signify getting rid of any bad feeling towards friends and relatives.
In some parts of the country people will also eat a traditional dish of oats, fine meal and water called ‘sowans’ and even call Christmas Eve ‘Sowans Nicht’.
Christmas Day
Celebrated on the 25th December, Christmas day of course centers round family and dinner. We Scots will most likely have the winter favourite of soup for a starter – cock a leekie, spicy parsnip and carrot and coriander are popular choices. However, if you’re not a fan of soup, freshly caught smoked salmon is never in short supply, and is chiefly served with caviar as a salmon & caviar rilette.
For the main meal, roast turkey with cranberry jelly, roast potatoes, parsnips and brussel sprouts are customarily on the menu. Many families may also have multiple meats as part of the spread; Aberdeen Angus beef, pheasant, pork, goose and venison are top picks.
The Scots love our stuffing – whether it’s in the turkey or on the side. Kilted chipolata sausages (sausages wrapped in bacon), gravy and even steak pie are also included in a traditional spread.
A delicious and rich traditional Scottish Christmas pudding will usually be the dessert. This is served with brandy butter, rum sauce, custard or fresh cream.
Boxing Day
‘Boxing Day’ derived its name in Scotland and the rest of the UK centuries ago when the Lords & Ladies would distribute boxes of gifts and supplies to workers and families residing on their land.
In a modern Scotland, Boxing Day triggers the start of the Winter Sales where bargain hunters can expect to pick up great deals! Shops are usually busier than even black Friday!
Hogmany
Hogmany in Scotland is like no other – from singing and dancing to the world famous Auld Lang Syne to traditional fire festivals. Must see fire festivals in Scotland are Stonehaven, Comrie and Biggar.
First footing is also a popular Scottish traditions where friends and neighbors visit each other bearing gifts. The first person to enter a house can either bring good luck or bad luck. A tall, dark and handsome man is the luckiest, whereas a red head or fair-haired person is unlucky!
What’s your favourite festive tradition?