“Auld Scotland wants nae skinking ware, that jaups in luggies; But, if ye wish her gratefu’ prayer…. Gie her a haggis!” Robert Burns 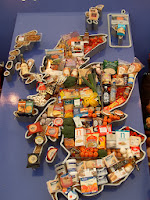 Scotland certainly seems to be on a role at the moment – what with 2014 being the ‘Year of Homecoming’, Lonely Planet naming the country as the 3rd top country to visit in the WORLD, hosting next years Commonwealth Games, and of course, the food & drink industry going from strength to strength!

We were really encouraged to read a recent article about the Scottish food industry and its successes in export around the world. It mentioned that currently, the Scottish food and drink industry is at an all time high and is worth £5.4 billion to the economy. Exports in food alone have rocketed by 63 per cent between 2007 and 2011. The sector also provides over 330,000 jobs in Scotland – and with a population of around 5 million, 330,000 jobs is a significant number!

So, what exactly makes Scottish food so desirable to the rest of the world?

In our opinion, we think that Scottish food reflects the landscape in many ways – rich and natural. The copious rivers not only offer high-quality, healthy and delicious salmon, but the water itself is so fresh that it is sold in bottles, namely Highland Spring or Strathmore.

Scottish whisky or ‘Scotch Whisky’ is famous around the world, with sales booming abroad – particularly in China. The product is known for being at the top of its game, which is akin to our very own highly sought-after Aberdeen Angus beef. The name proudly on display above a beef counter is synonymous with a quality, excellence and superiority.

Of course, we Scots are also renowned for our unusual but delicious concoctions. We aren’t talking battered mars bars here, but quality produce such as white and black pudding, and the world-famous haggis! Speyside Specialities is proud to be counted amongst the 21% of the entire Scottish manufacturing workforce to be producing quality, delicious and world-famous food products.

It is not only the traditional products that are off to a flying success. There are currently numerous young, innovative and progressive food and drink brands mirroring effective launch and export models and achieving considerable success. We have recently launched our ‘powerfood range’; a functional food for fitness enthusiasts, and our hope is to achieve recognition and encouragement for introducing a pioneering product to the industry.

All in all – Scottish food is associated with being extremely high quality and fresh, which is why we are so proud to be a part of that industry and culture.  Why wouldn’t people want to buy Scottish? It’s just a natural decision.

Do you think the people of Scotland shout about our produce enough? What else could we do to help bring Scottish producers to the fore?