No summer would be complete without the chime of an ice cream van. 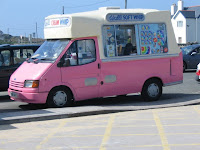 The children excitedly queuing up for 99 Flake or a screwball to cool off in the summer sun.
But where have they all gone I hear you ask?
We were amazed to read that the number of ice cream vans on Britains’s roads has dropped from 25,000 in the 1970s to just 5,000 today.

Just last week the Sunday People has teamed up with the Ice Cream Alliance to launch ‘Cone and Get One’ in the hope of reinvigorating public interest.
Zelica Carr, CEO of the Ice Cream Alliance, “The ice cream van has been a great part of British culture for decades and for many people the sound of the chimes brings back joyous childhood memories that a lovely treat is on the way.
“I’m sure we can demonstrate the huge support that exists for ice cream sellers amongst the public and hopefully persuade the powers that be to add their support to preserving this great British institution.”
So what has caused the disappearance of the vans?
Some local councils are charging traders £3,000 a year for a street trading licence and the costly congestion charge zones in London have priced vendors out of selling hot-spots.
Even the government are doing their bit to help out van drivers.
They relaxed rules for the first time in 31 years on how long ice cream van chimes can be played.
Van drivers will be allowed to play songs for up to 12 seconds instead of four.
Let’s hope the country embraces the latest campaign and we start to see and hear more vans on our streets.
What’s your fondest summer childhood memory? What was your favourite cone from the ice cream van?