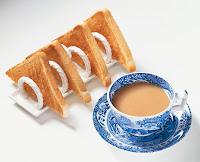 We’ve all been sat in a restaurant puzzled as we stare at the extensive wine list trying to plot which one will go nicely with the chef’s culinary delights.
The non wine connoisseurs amongst us we would get away with hoping the play safe white goes well with fish and a red will deliver with our meat, but a new drink is setting a trend and it’s one you might least expect.
Top chefs around the world are encouraging diners to part with their beloved wine for a cup of tea.
That’s right – tea.
Now if you saw Michel Roux Jr sitting down to a Boudin Noir, Oeuf Frit, Salade d’Asperges Crues et Chutney de Tomate Epicée (Black Pudding, Crumbed Egg, Crackling Asparagus Salad and Spicy Tomato Chutney to you and me) with a nice cup of Tetley you would think the world had gone mad, and you would be right.
But the new trend sweeping across Copenhagen, New York and now London is a wide variety of speciality teas that take pride of place on the menu.
Alexis Gauthier, a Michelin-starred chef said tea ‘enhanced the unami flavour’ in many of his creations.
He matches a starter of asparagus, broad bean and wild mushrooms with a green tea.
But why I hear you ask?
Well many chefs believe that wine can kill rather than enhance the flavours of a dish, but tea is seen as a much more subtle alternative. From a Lemongrass and Ginger tipple from Thailand to a Vintage Wild Black Paxsong from the volcanic soil of Laos, the list is endless.
30 per cent of drink revenues during a lunch service at Gauthier Soho come from tea sales.
Not surprisingly tea sales dominate coffee in the UK with 165 millions cup drank per day compared with 70 million.
So next time you visit your local restaurant ask for a cuppa with your steak and see what they say!