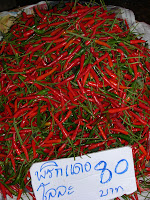 “The devil has put a penalty on all things we enjoy in life. Either we suffer in health or we suffer in soul or we get fat.” – Albert Einstein.

When you walk down the fruit and vegetable isles in your local supermarket the choice is almost endless.

But one particular fruit is quickly becoming a British favourite and it’s one you would least expect.
Chillies originate the Americas but after the Columbian Exchange the chilli spread across the world.

It’s not Mango from South Asia or pomegranates from Northern Africa but in fact the chilli.
Christopher Colombus brought the first chillies to Europe but previously they were only grown in the UK for medical purposes.
India remains the world’s largest producer, consumer and exporter of chillies. But as the the demand for chillies ever increases many Brits are taking to growing their own.
Farmers are barely able to keep pace with demand and festivals devoted to fruit and now chillies are the hotly sought after ingredient.
Chillies are being found in a whole line of products which is ever expanding from beer to cider to chocolate, sausages, ice cream, jams, sauces and even hot cross buns.
This summer will see a surge of chilli festivals taking place in places such as Brighton, Perth and Brighton.
In the US a study found that chillies are the second-most craved flavour after chocolate in the US with a psychologist suggesting the consumption of a chilli as an example of ‘constrained risk’ like riding on a roller-coaster where extreme sensations such as pain and fear can be enjoyed as the person knows they won’t hurt in the end.
Chillies by their very nature seek sun and heat so given the somewhat temperamental nature of the British weather growing them can be costly and time consuming.
So watch this space as you see more and more farm shops selling their own home-grown chillies.
What’s your favourite thing to do with chillies?