“We may find in the long run that tinned food is a deadlier weapon than the machine-gun.” – George Orwell. 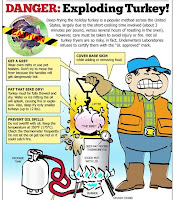 We all know the enjoyment and pleasure food can give us. But did you ever consider food as a dangerous weapon?
An Essex school just last week banned triangular shaped flap jacks after they caused injury to a pupil.
A boy was hit in the face by a flapjack resulting in the school leading a review into the texture and shape of the flap jacks.
Understandably health and safety executives deemed the decision as absurd stating that the issue was the fact pupils were throwing food at each other not the shape of the flapjack.

Now as if this incident wasn’t bizarre enough, spare a thought for a family in New Zealand.
The Kiwis like to deep fry turkeys but this risky method can often back fire, literally!
A mother and father were away for a weekend, leaving their son in charge of the house. He spied a chicken in the freezer so decided to invite some friends round and fry it up.
As they sat having a few beers in the garden they stuck the chicken in to cook, a few minutes later they heard a boom.
The chicken had exploded and a fireball of meat shot through the air smashing the nearby house window and setting fire to the curtains.
Needless to say the local fire brigade weren’t too impressed as he explained what had happened, never mind his parents.
In New Zealand its estimated that more than 1000 major fires have been caused by exploding turkeys.
And watch out for out of date biscuits. A man ate a ginger nut that he later found out had spent five years in his cupboard. Thinking it would be soft the man bit into the biscuit but instead dislocated his jaw much to the bemusement of staff at the local accident and emergency!
Have you or your friends been involved in any bizarre food injury incidents?
For the latest from Speyside Specialities remember to like us on Facebook (Speyside Specialities) and follow us on Twitter @speypuds.
www.speysidespecialities.co.uk